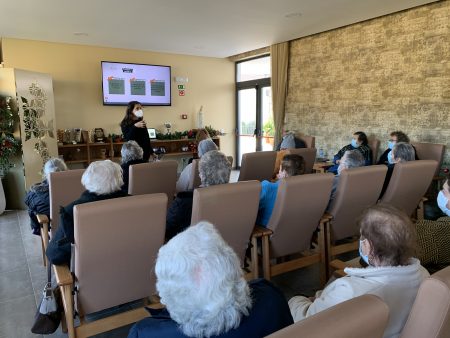 The elderly population has emerged as one of the main target groups of the Não Vale TB project, given the predominance of aged individuals in the territories covered by the intervention, namely in the municipalities of Penafiel and Marco de Canaveses. Initially, the actions aimed at the elderly were limited to the unemployed and retired population of the stone industry. However, as the team was included in the territory and knowing the local responses of social action, such as the Day Centers, the need for an intervention directed to the elderly in general was evidencing, either because of their vulnerability to Tuberculosis, or because of their previous experience with the disease, from a preventive perspective.

The team identified in this population a potential for the promotion of health literacy, specifically the tuberculosis framework, taking into account that their life experience and previous contact in their informal network with the problems addressed, emerge as an excellent starting point for discussion and reflection on the subject and for clarifying some information that is intended as clear and simple as possible. In addition to the intervention with themselves, it is intended that this population emerge as a vehicle of information with those around them – whether children, grandchildren, friends, in a logic of social and community mobilization.

Psychoeducational intervention emerges here as a tool for health promotion and tuberculosis literacy, together with the contribution to an aging process and active participation in the communities where this population is inserted. The team sought to develop activities appropriate to the age group and with a playful-interactive character, opting to perform games such as “Mitos e Verdades”, in which it was intended collaboratively to build the correct information and stimulate the involvement and interest of people in the theme.

The game “Mitos e Verdades” gives simple and clear answers to questions that raise greater doubt among populations and the public in general. Due to the importance and clarity that the game conveys on the issue of tuberculosis, it was considered pertinent, in a weekly basis, to make its dissemination on the social networks of APDES, namely on Facebook and Instagram, allowing each person to give their opinion on the statements presented, and later be made an enlightening publication about them. Each week is made an allusion to a different and pertinent question. Thus, it is intended a greater dissemination and clarification among the public in general about the doubts, myths and truths surrounding the Tuberculosis problematic.

Know more about our project  https://apdes.pt/pt/portfolio/naovaletb/